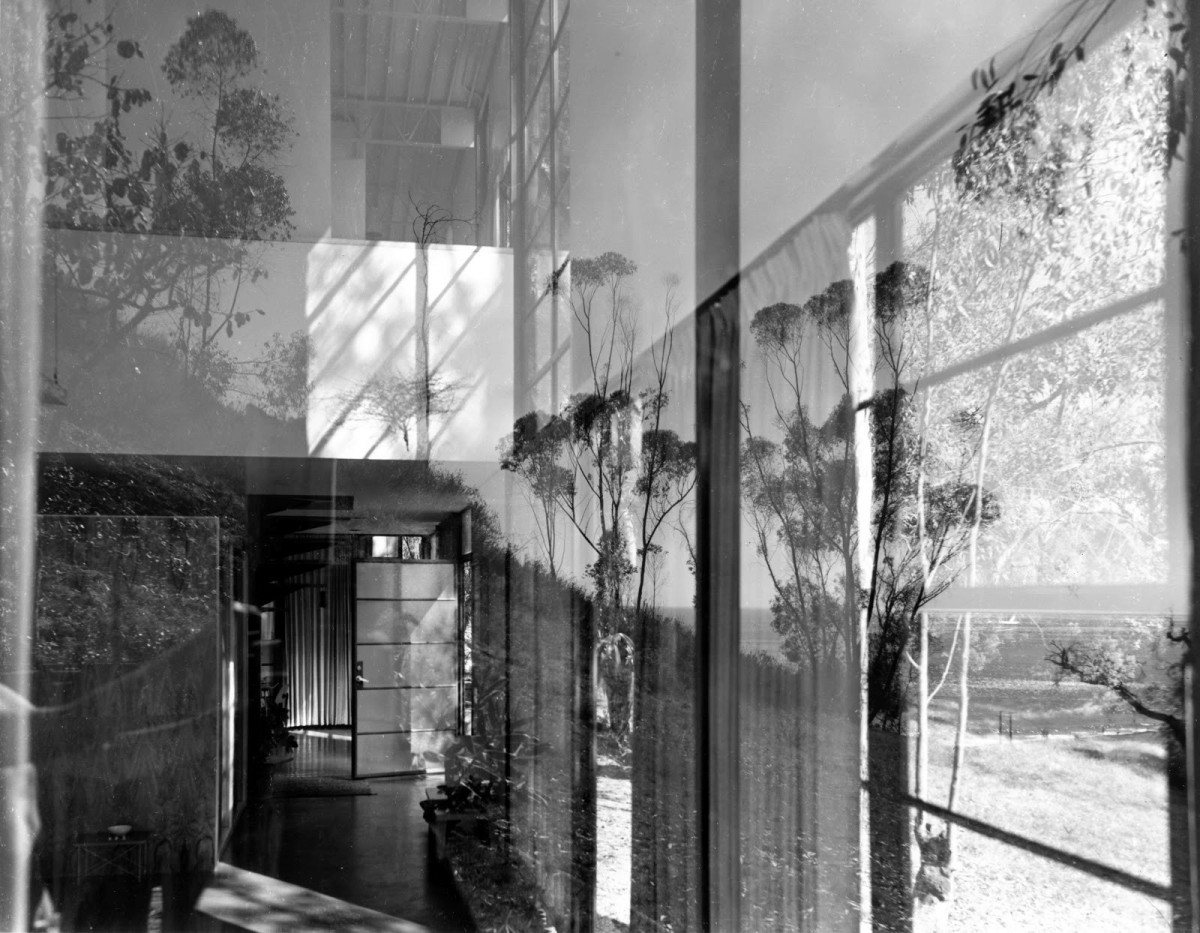 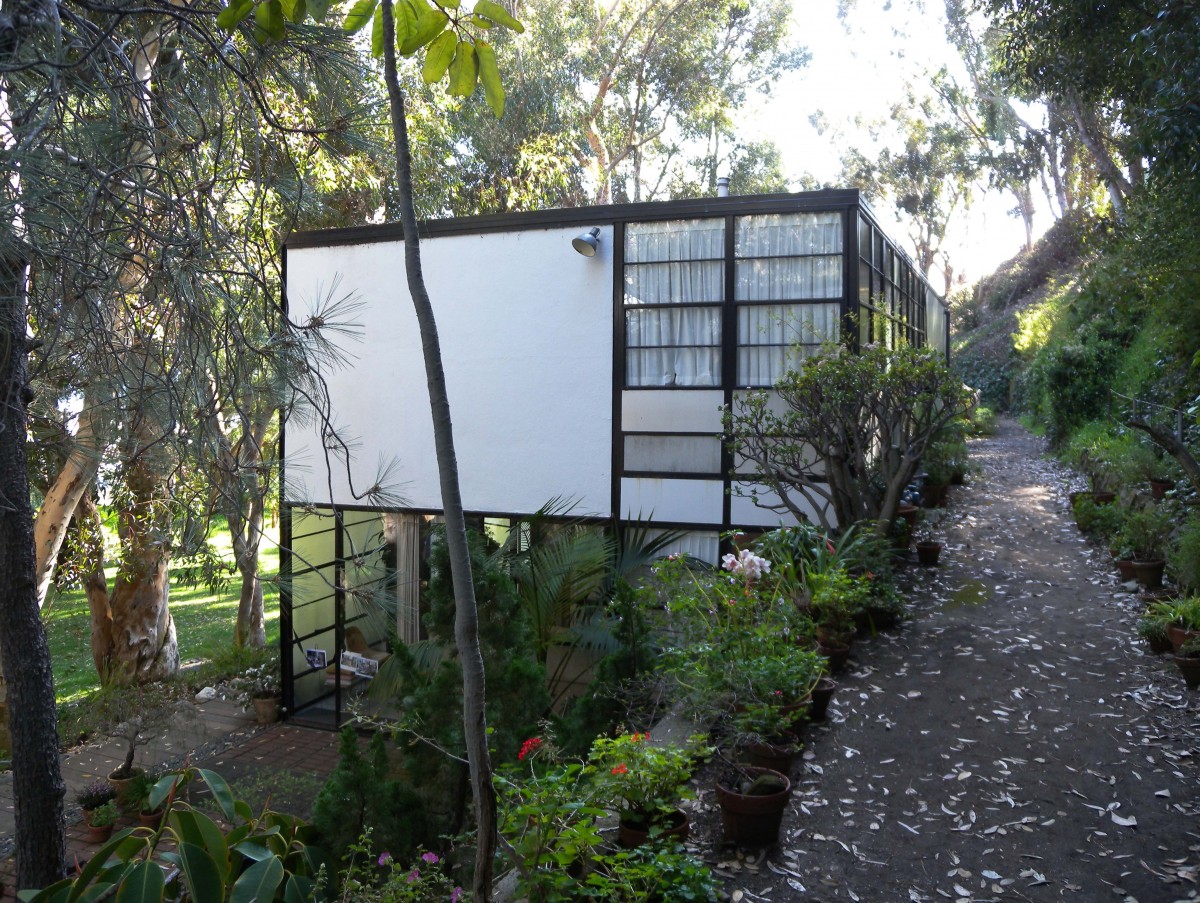 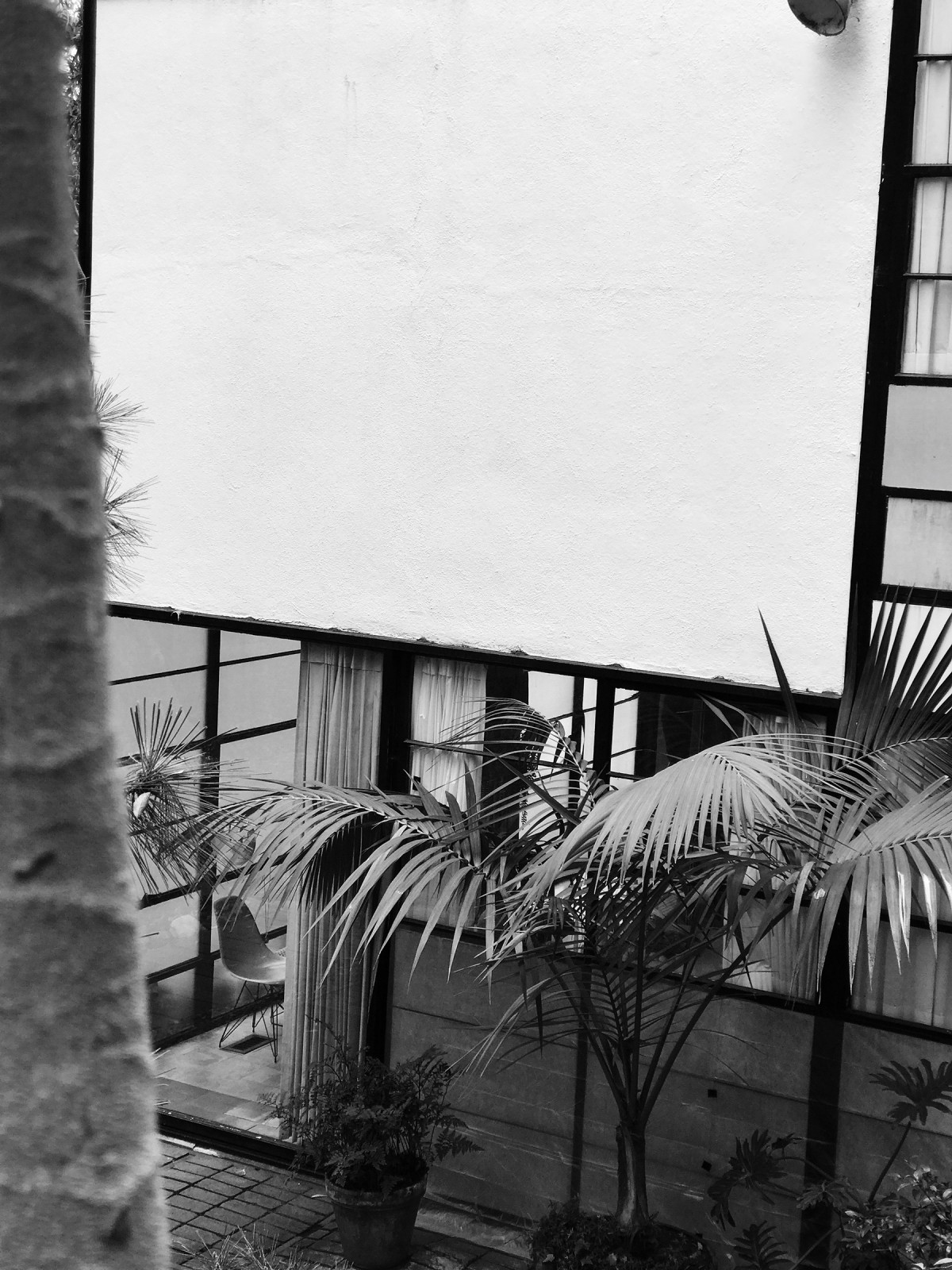 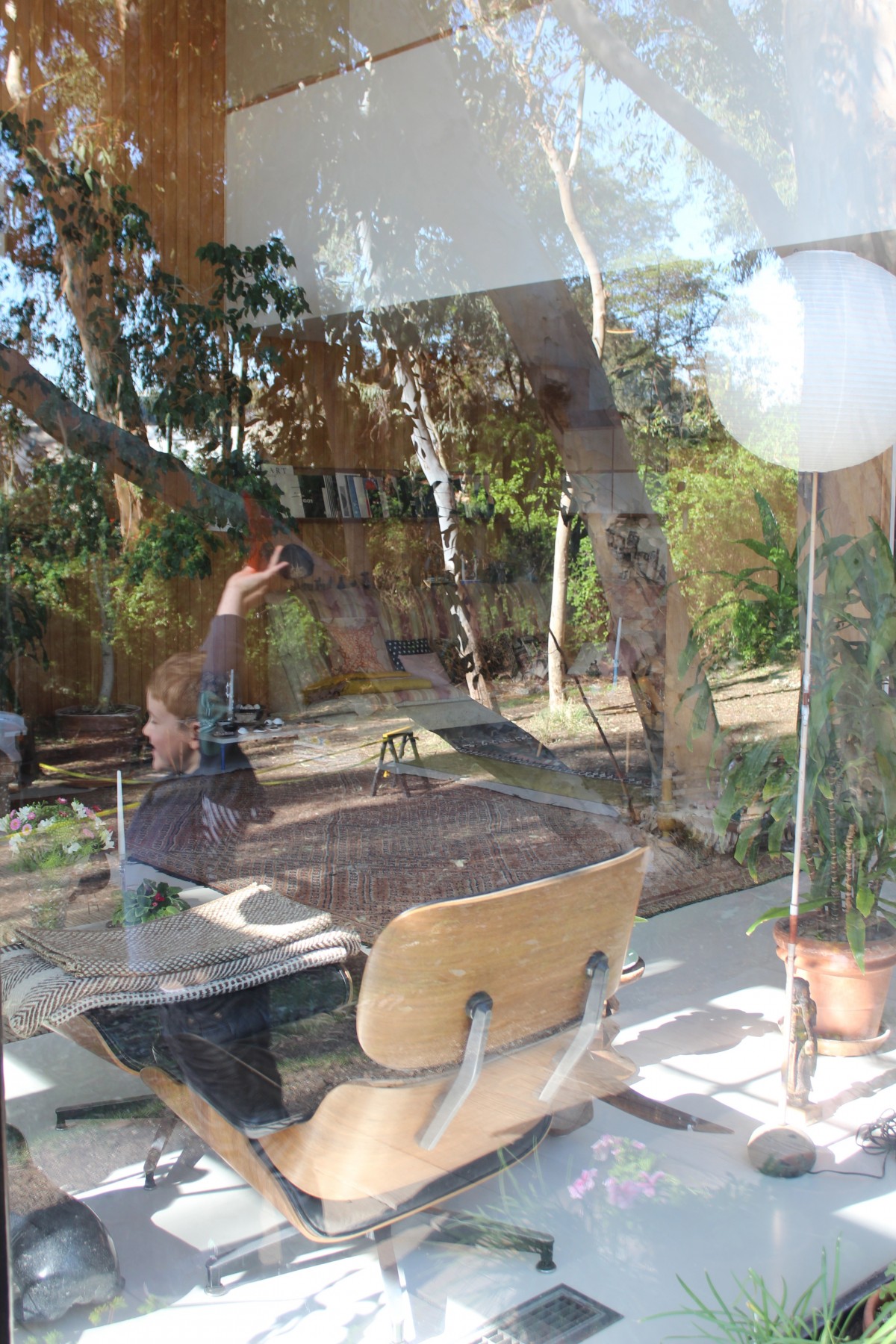 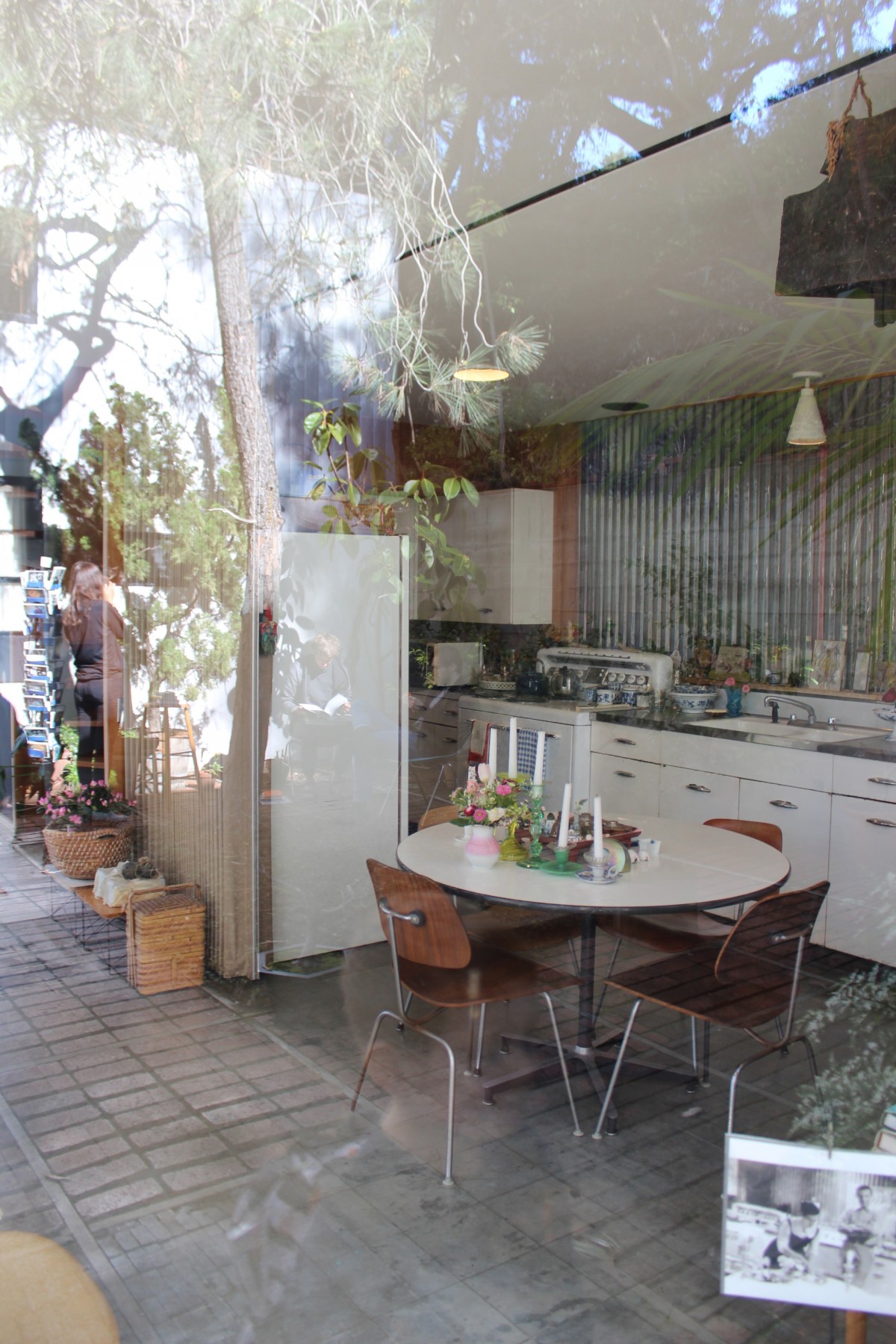 As I look for the address, I begin to feel like I'm walking around the pages of a book dedicated to post-war modernism in architecture. I'm reaching the bottom of a narrow street, 23, Shatoka, in the Pacific Pallidsides neighborhood in Los Angeles. The glass house with a steel structure - actually two separate buildings - a living area and a studio, separated by a little patio, is at the end of a green meadow, covered by a dense row of eucalyptus trees. "It looks like Mondrian in a frame of eucalyptus branches!", exclaimed at the moment my gaze was enveloping the facade. The woman checking my reservation smiles. The shape of the building - a simple, two-story box - contradicts the sophistication of the interior layout. With the double height of the living room, the inner second level of bedrooms and fluid spaces, the house seems to have embody the basic principles of modernism. I transfer to mind the names of the furniture, which have become the icons of the design, the original of which I see in the interior. The place looks as if the owners have come out for a while and will come back every minute. Fresh flowers, personal belongings, small souvenirs from family trips. Artistic disorder. Meanwhile, the curator tells the story of the house. The house of the famous designer family Iams is one of twenty-five, built on the assignment of Arts & Architecture magazine. Charles Eames falls in love at first glance at the plot and stakes everything he and Ray, his wife and creative partner, have in order to buy it. The original project was drafted in 1945, but due to post-war material shortages, its construction slowed down by three years, when Charles and Ray discovered the property and decided to change the architecture. The eleven and a half tons of iron ordered for the original design are strictly recalculated so that the new building does not reach just one steel beam. The family moved into the house on Christmas Eve in 1949 and they both lived there for the rest of their lives. Charles died in 1978. Rey dies on the same date ten years later, and his home remained almost intact. Among the personal belongings found in it is the following letter. "I am almost 34, I am alone again and have no money - I love you and I want to marry you very, very soon." The story of a wonderful creative and life union follows.