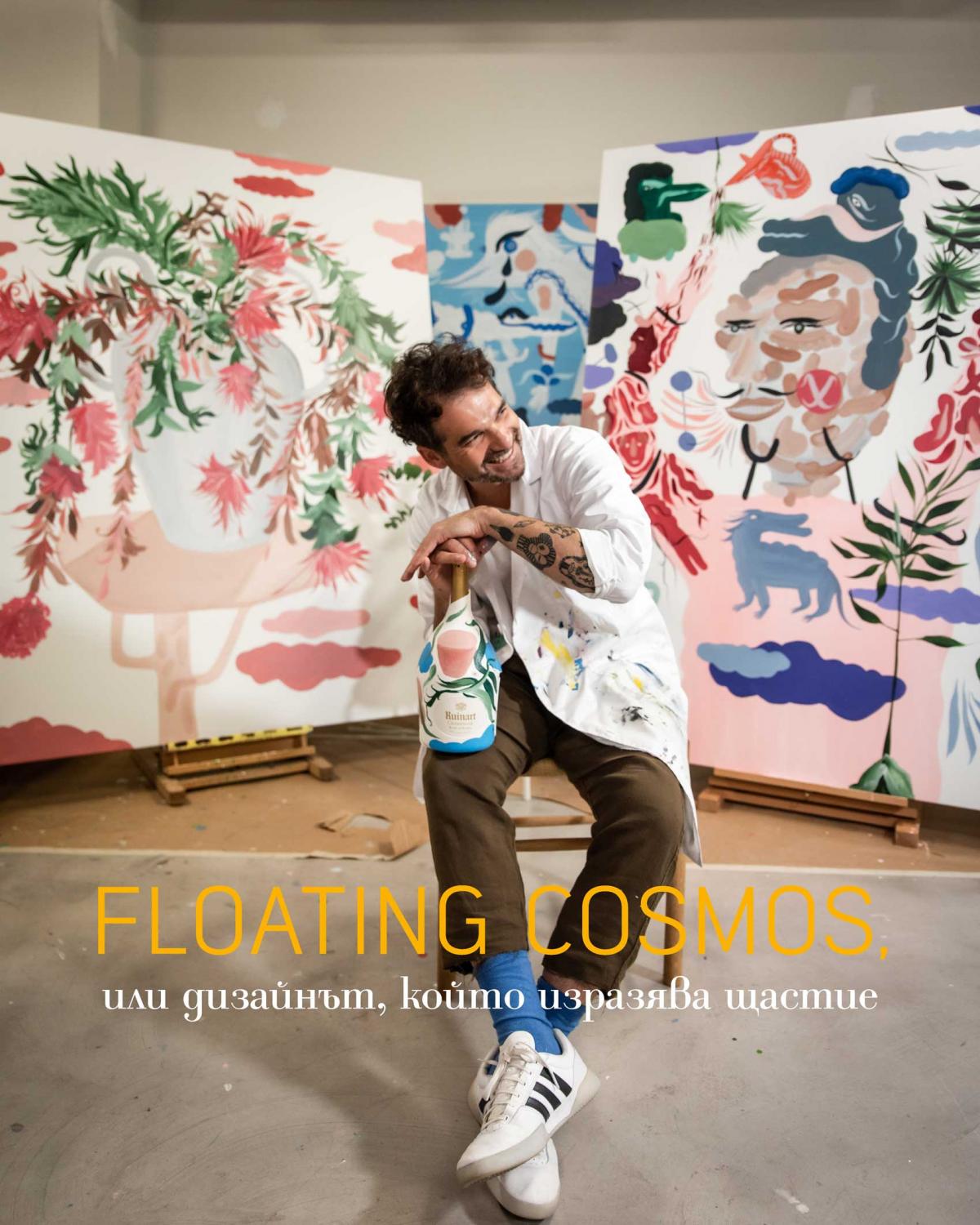 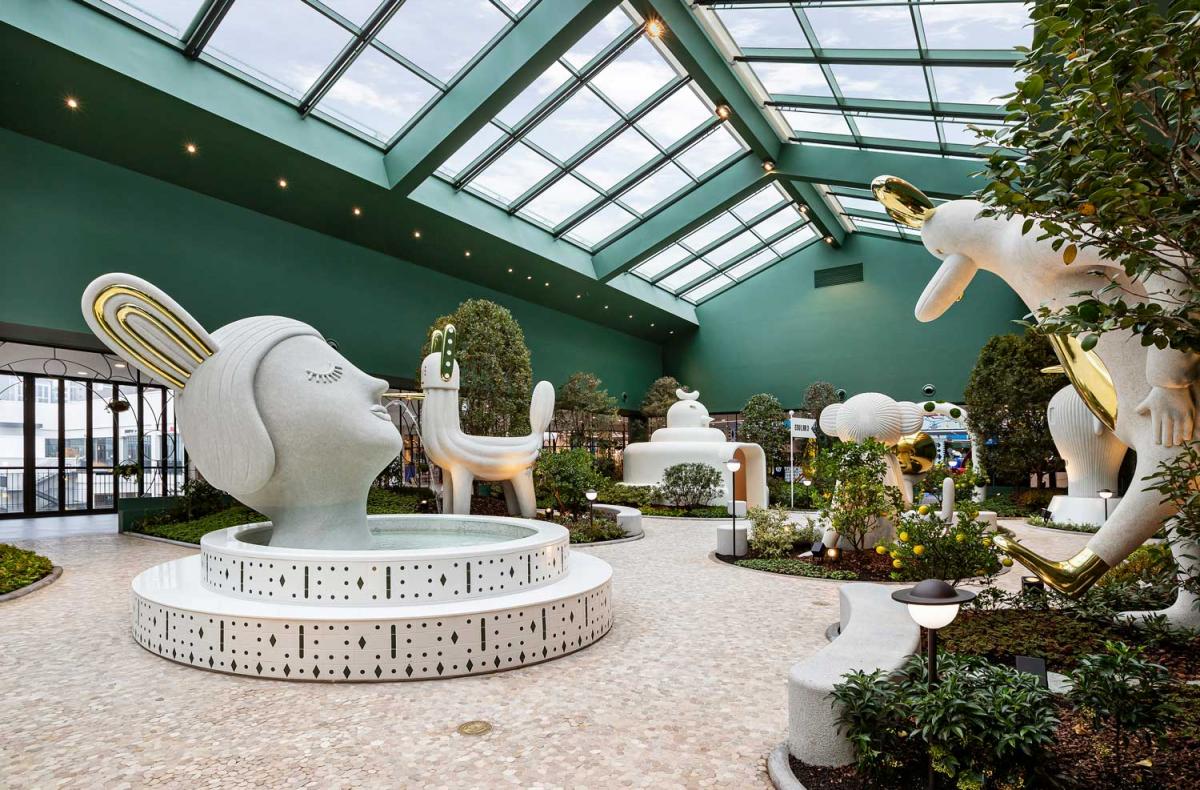 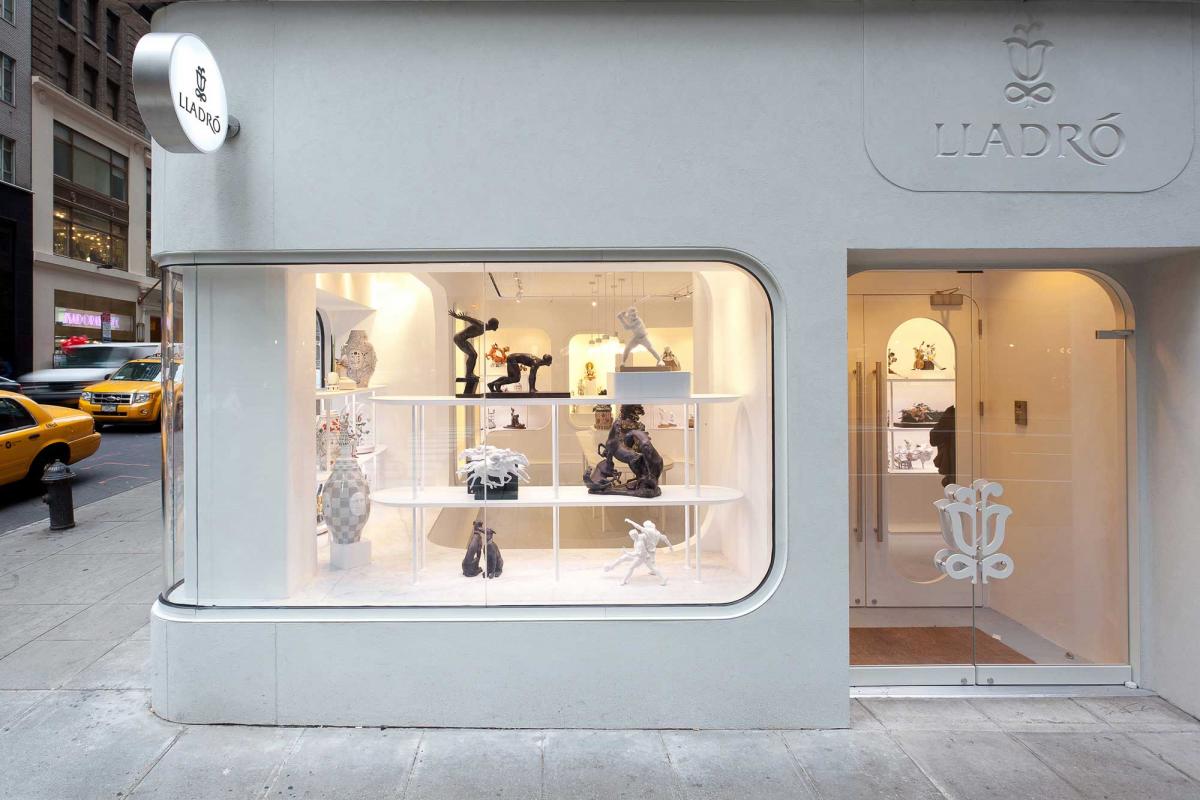 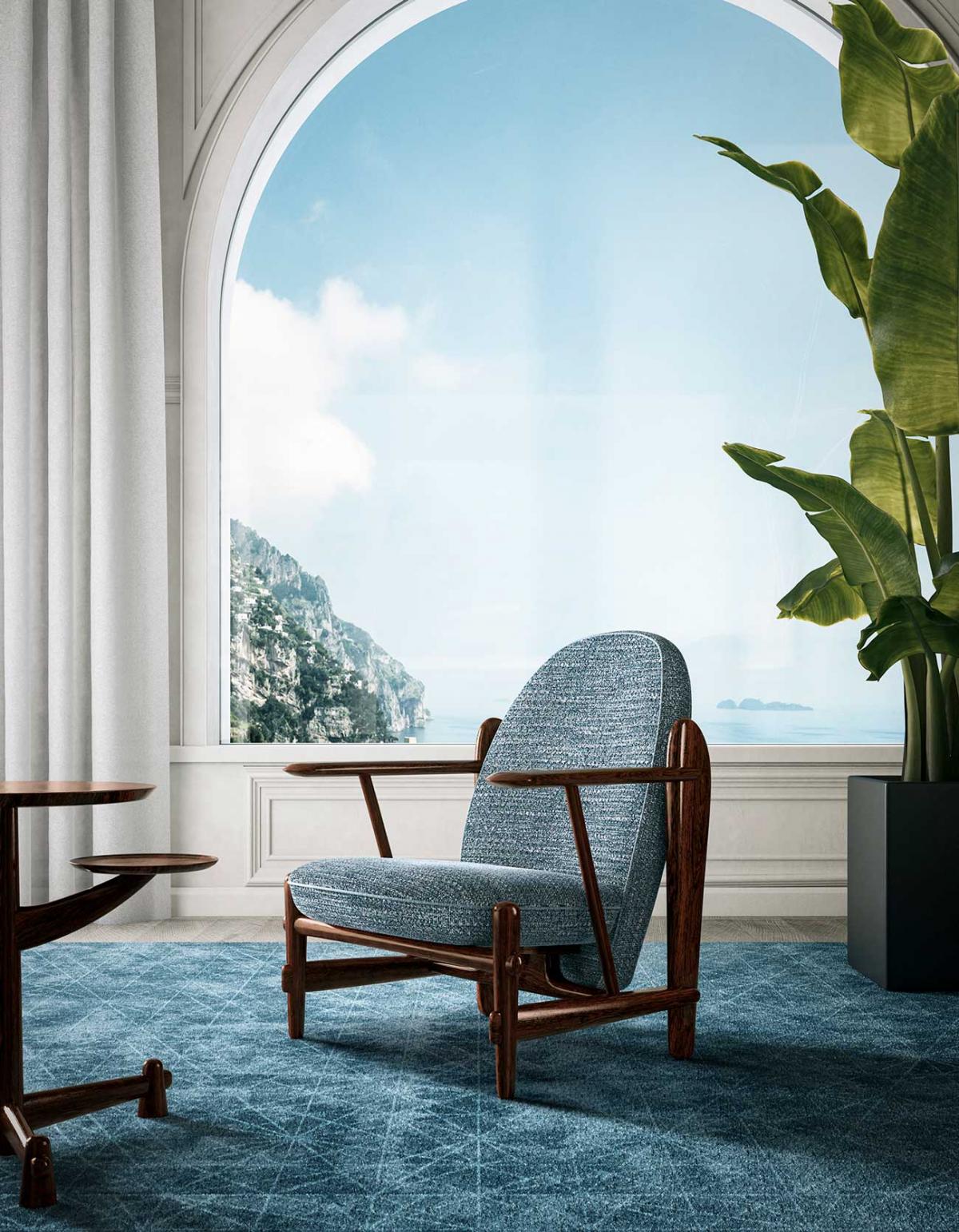 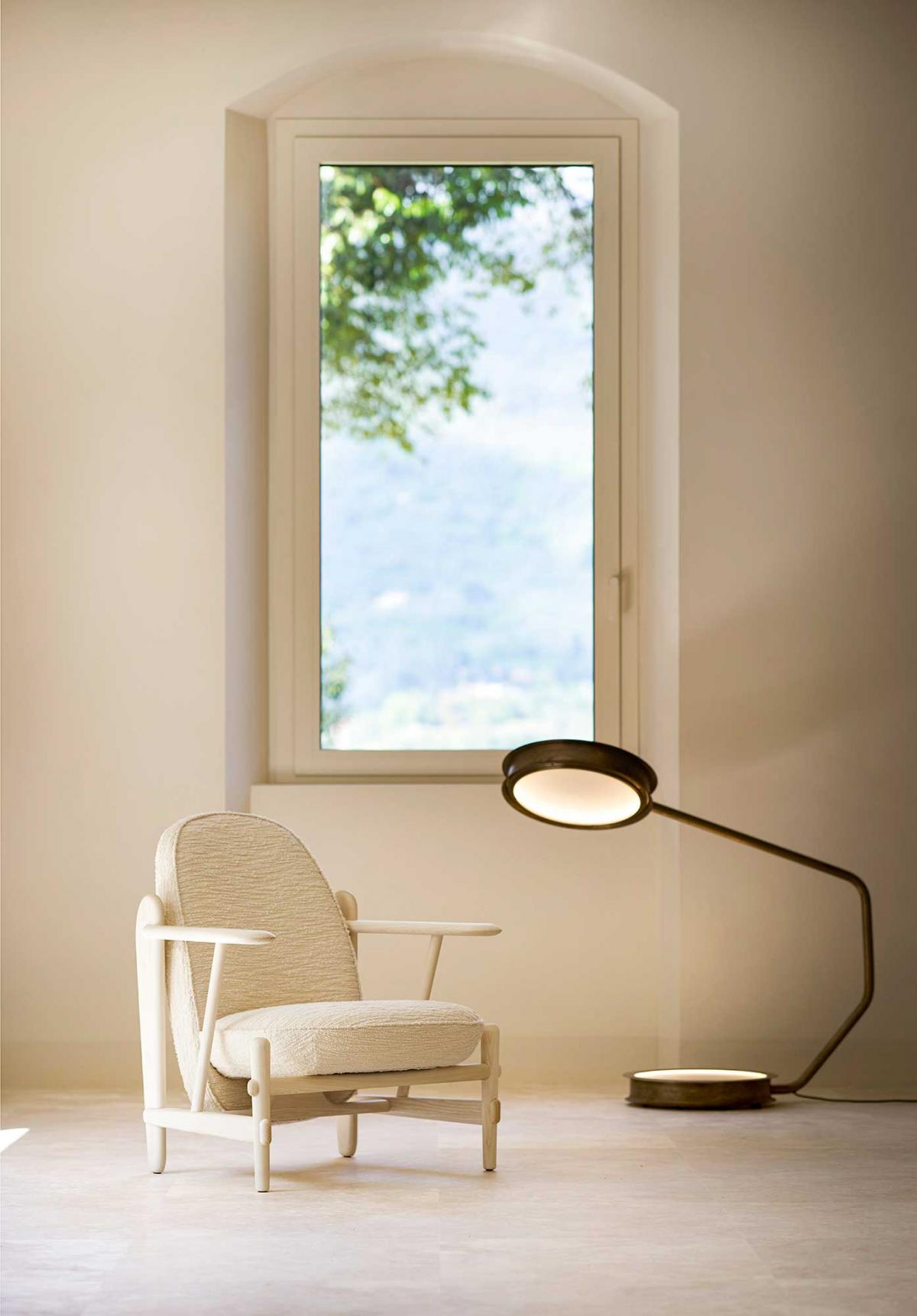 FLOATING COSMOS, or the design that expresses happiness - Jaime Hayon

"We have reinvented the feeling of pleasure, relaxation and joy," says Jaime Ayon, one of the world's leading multidisciplinary designers. We meet him at the opening of ARCO, the biggest art fair in Spain.

At the end of March in Valencia, World Design Capital for 2022, the Spanish designer Jaime Ayón received the National Award for Innovation and Design of Spain. The highest state award in this field coincides with the twentieth anniversary of the founding of his Hayon Studio.

Born in Madrid in 1974, the name of the designer Jaime Aion appears in the leading design and art publications in the first years of the new millennium. In his fun and childlike rebellious style, he mixes graffiti and urban culture with currents such as baroque, surrealism, pop art. Aion quickly found himself at the forefront of a new wave of artists purposefully blurring the lines between art, interior and product design, while at the same time relying on craft traditions. After graduating in industrial design in Madrid and Paris, in 1997 Aion joined the Benetton-funded creative academy Fabrica, where he worked closely with legendary photographer Oliviero Toscani. In the rich and varied creative biography of Jaime Ion, we find cabinets for the furniture company BD Barcelona Design, furniture for the Italian mosaic company Bisazza, a shoe line and store for Camper, a chandelier for Swarovski, porcelain figures for the Spanish ceramics factory Lladro. He has also collaborated with Cassina, Baccarat, Fritz Hansen, & Tradition. He is the author of the interiors of hotels, restaurants and museums all over the world. Jaime lives and works in Valencia and his Hayon Studio also has offices in Barcelona and Treviso, Italy. Winner of the Elle Decoration awards, Wallpaper magazine ranked him among the world's 100 best designers of the last decade, and the Times named him one of the leading creative visionaries of our time.

We meet Jaime Ion at ARCO, the biggest art fair in Spain. Two oversize canvases behind it is Floating Cosmos – a fabulous universe inhabited by real and fantastic creatures, animals, birds and household items. This is Jaime's vision of "Earth, Life and Celebrating Nature". In front of him - twenty magnum bottles of champagne are "dressed" in Second Skin. The project, in which the design for each bottle is a unique work, illustrates the joint vision of Jaime Aion and Maison Ruinart for eco-friendly luxury. The proceeds from the sale (€600 per bottle) are earmarked for the (R)ForestProject and their reforestation mission. Second Skin's plots create an imaginary space somewhere between modern everyday life and wild nature. The artist has chosen a rich, warm palette of thirty-seven shades. "My creative universe is related to the way I perceive the world. In it, nature and culture are powerful sources of inspiration, and my personal experiences feed my imagination," says Jaime Ion. The collaboration with Ruinart also marks his return to one of his first pursuits, painting. His own home is also his studio, and when he is out or traveling, he always carries colored pencils and a notebook in his backpack.

The garden of our salvation

Nature also inspired one of Jaime Ayon's latest major projects, Moka Garden, at the Hyundai Museum of Kids' Books & Art (MOKA) in the South Korean city of Namyangju, near the capital Seoul, for which he received the Wallpaper Design Award. He has created a children's playground and a library specializing in nature books, and the most spectacular part of the project is the covered garden named after the designer. Jaime Hayon Garden is a botanical garden populated by large granite sculptures in the shape of animals. In it, the author invites visitors to "rediscover the beauty and preciousness of nature that we often take for granted." According to him, today gardens are one of the few places where we can take a break from the "madness of mechanical things". Each sculpture and the corresponding expressions are carefully researched and designed to establish a strong connection with the thoughts and emotions of the visitors. The project is also amazing in that it was created entirely online, "with thousands of virtual meetings." Moka Garden even opened before Jaime Aion could see it live.

Everything on the table

In 2020, the furniture company Benchmark initiated the Connected project and invited several famous designers to make a table and chair adapted to the new lifestyle and work from home brought about by the lockdown. Furniture becomes reality only through virtual communication and video conferencing. Jaime Ion's Mesamachine is a sophisticated multi-functional piece of furniture that brings together space for work, play, dining, games and family time. "When we were forced to stay at home, we realized that our homes could be much more beautiful and comfortable. We rediscovered the feeling of pleasure, relaxation and joy. The new desire for better homes has also led to the growth of the industry in ways unimaginable until recently, including through online sales. There are still many surprises to come in this area," says Jaime Ayon. He himself feels best in a home where the atmosphere, the transition between natural and artificial light, between shapes and colors, between the interior and the outside world brings him a feeling of comfort and happiness. "My design is related to the beauty of the place where I live. My creativity is a way to express happiness. My objects are born with the desire to convey a positive message, to bring color, to charge with a positive vibration. Like looking at the horizon, always looking forward," shared Jaime Ion during the Madrid Design Festival, where in 2021 he received the prize for "expanding the boundaries of design".

Credit counseling services are provided by Credit Center OOD - a licensed credit consultant registered in the Register of the Bulgarian National Bank with number BCI00002.