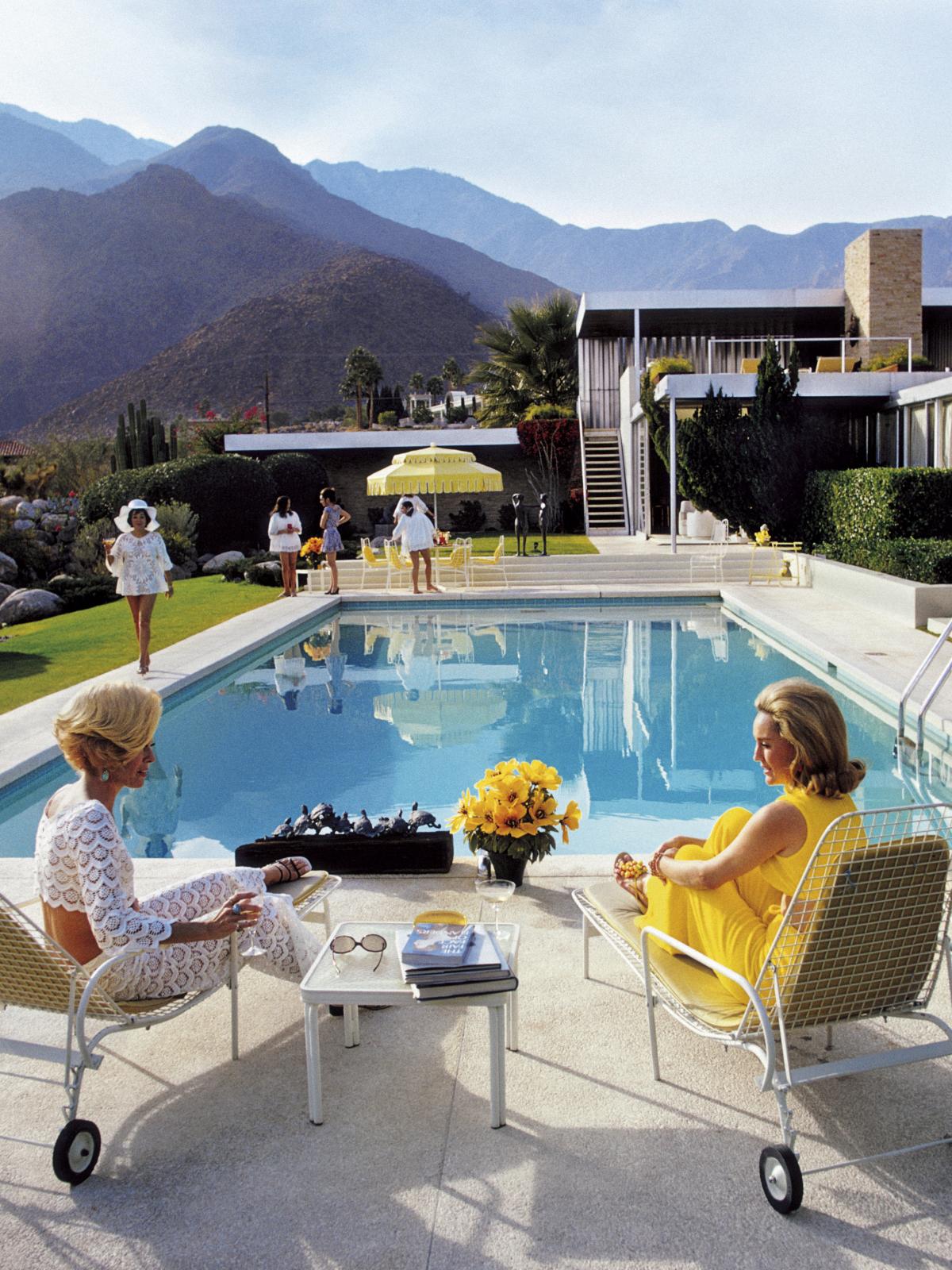 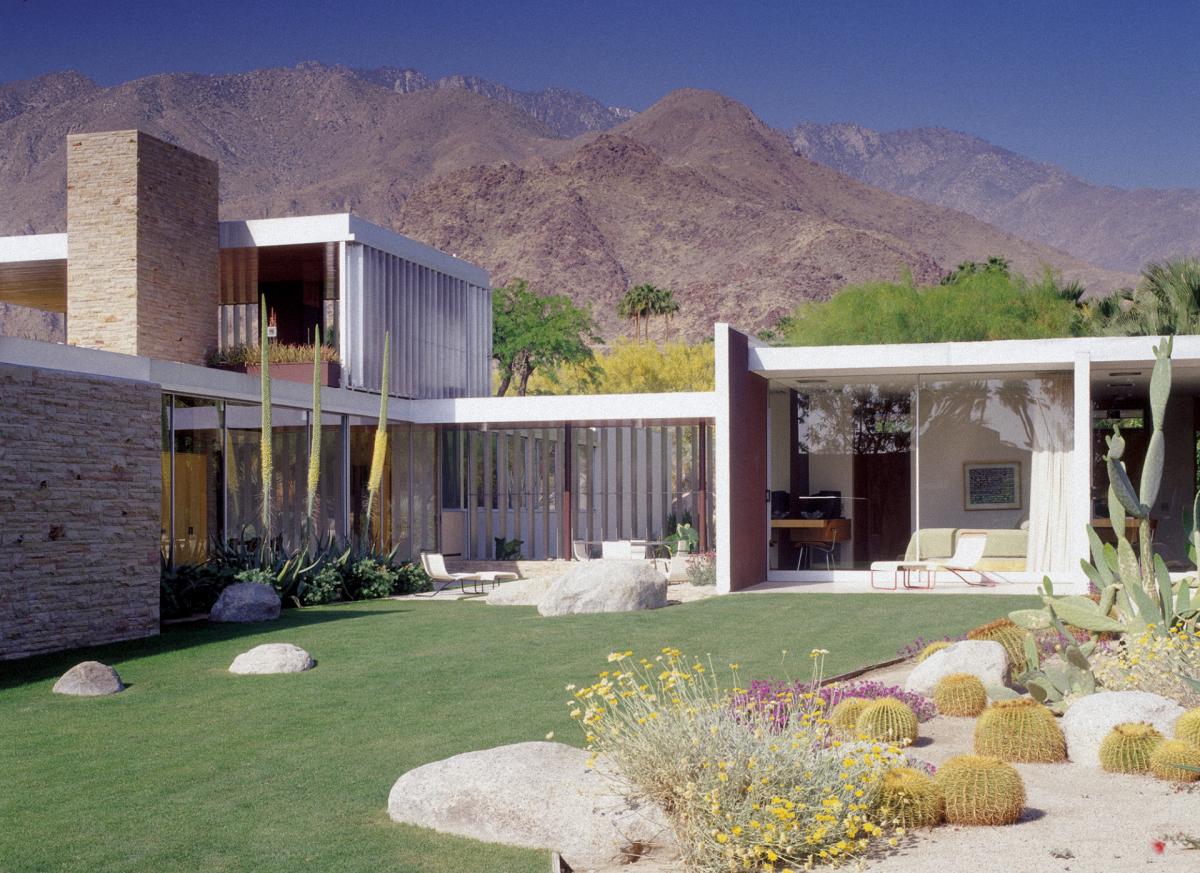 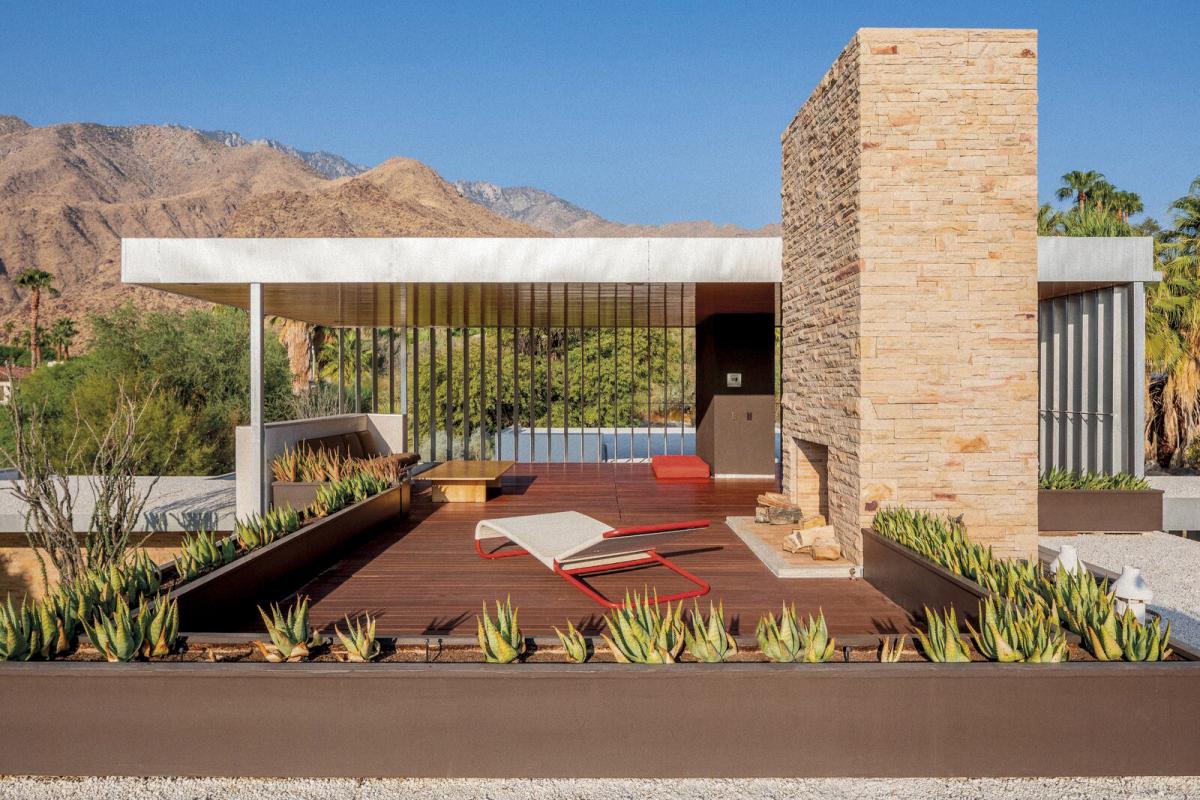 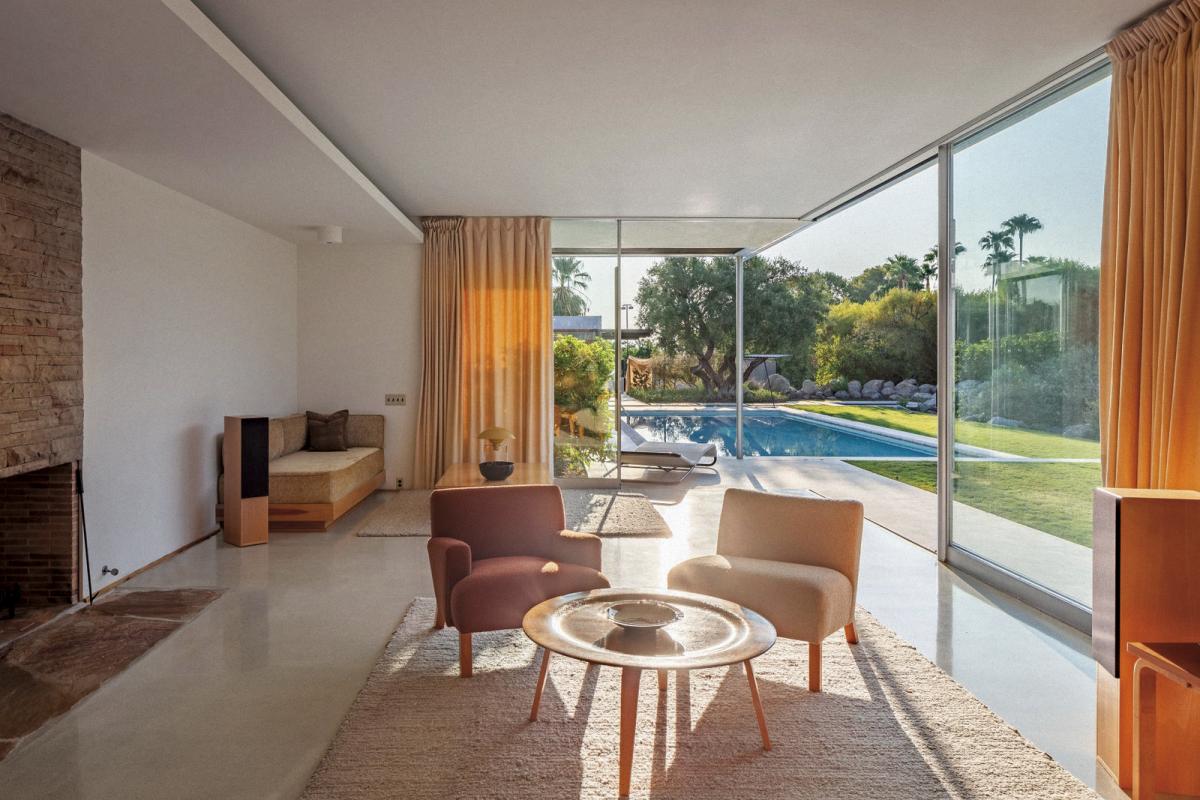 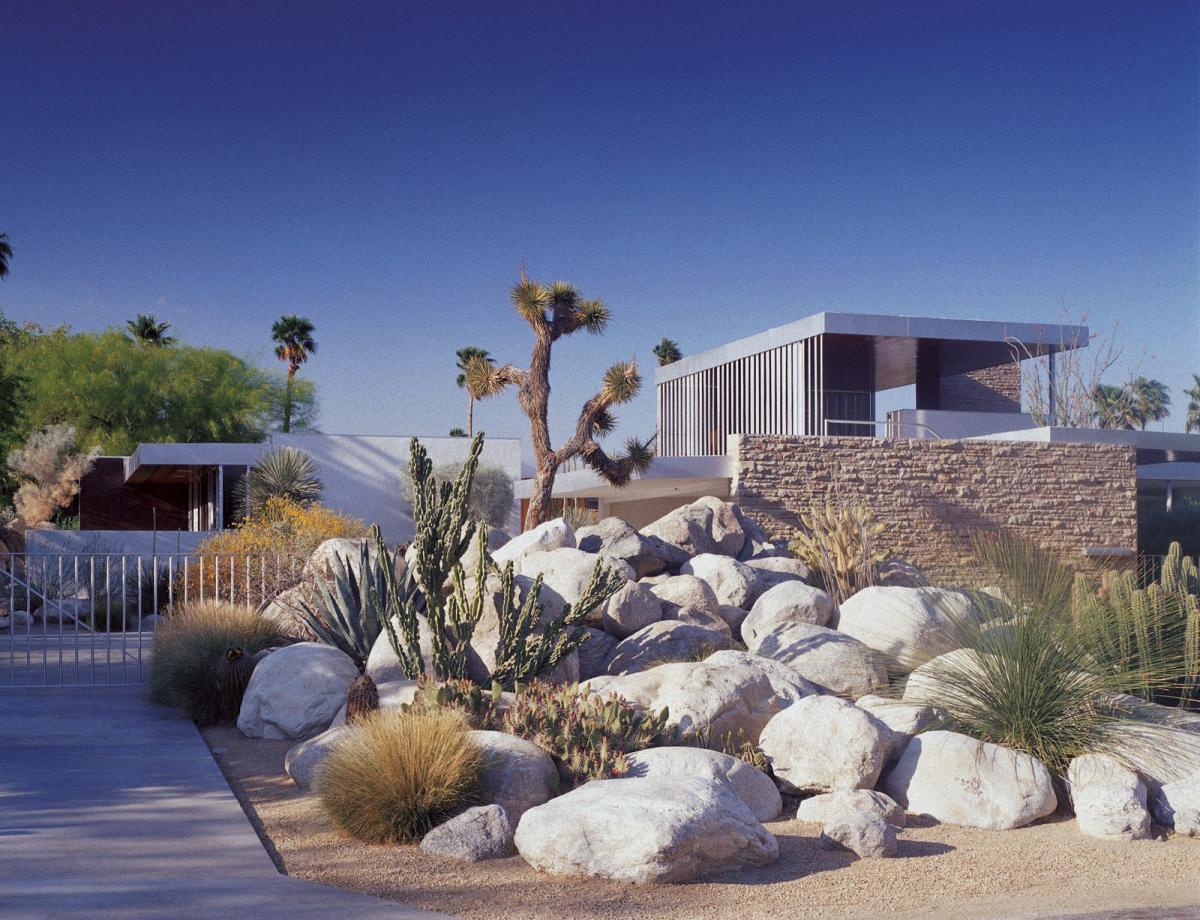 The history of the Kaufmann Desert House started in 1946 when the merchant tycoon Edgar Kaufmann commissioned the renowned architect Richard Neutra to design a vacation home for him in Palm Springs. Famous for the department store bearing his name in Pittsburgh, Kaufmann was someone who appreciated superb design. He wanted a house that would dare to stand out against the background of the desert landscape. Neutra was an immaculate choice. Born in Vienna, he was one of the emblematic names of American architectural modernism. He was called ‘the architect who built Palm Springs.’ Thanks to Kaufmann’s vision and Neutra’s talent, the property turned into a real architectural masterpiece and a model for post-war modernism in Palm Springs.

The residence is situated in the Colorado desert, south-east of the San Jacinto mountains. Built out of glass, steel and Utah stone, it stands out and complements the landscape at the same time, which is utterly compelling. The harmonious bond between the indoor and outdoor spaces was achieved through large glazed surfaces and vertical aluminium blinds – providing protection against wind and sandstorms. Neutra cleverly circumvented the local bans on two-story buildings by constructing an open room above the main building. It is called a ‘gloriette’ (from the 12th-century French word gloire, meaning ‘a little room’). The home was created with the idea to be inhabited only 60 days a year – in January and February, when Kaufmann wanted to get away from the harsh winters of the North-East. Alas, the tycoon was only able to enjoy the Palm Springs sun only till 1955. After his death his family sold the property.

Subsequent residents, including the singer Barry Manilow and Eugene Klein, the owner of San Diego Chargers, introduced some changes that made the house better suited for year-round habitation. The built-up space was expanded, and the patio was covered and an air conditioning system was installed. As a result of these ‘improvements’ however, the property started to lose its spirit. In 1993 it passed into the hands of Brent and Beth Harris – an investment manager and an architectural historian – who bought it for USD 1.5 million. They decided to restore the house to its original design and commissioned the renowned ‘desert modernist’ Albert Frey. As they had no access to the original plan for the property, they turned to university archives and previously unpublished pictures of the architectural photographer Julius Shulman. Architects specialised in restorations conducted on-site work in order to establish the initial materials, linings and colours. In order to achieve complete authenticity, the team restored even the concrete and silicon sand flooring. The new owners went as far as managing to have a section of a Utah quarry closed in the 1940s reopened just to get some stone in just the right colour nuance. The Harrises also bought adjoining plots of land, thus expanding the space around the house almost two-fold and restoring the home’s initial aura of remoteness.

Slim Aarons’s 1970 iconic photograph ‘Poolside Gossip’ has become a symbol of modernism, along with the house itself. The image shows the then host of the house, Nelda Linsk, and her friend Helen Kaptur. In 2015 the organisers of Palm Springs Modernism Week decided to recreate the photograph and invited the two ladies to pose as models once again. Mrs Linsk retold the story of how Aarons called her and asked for permission to take photos of the estate. He also asked her to invite friends. The entire photoshoot took about an hour and a half; there was no stylist, nor a makeup artist – everything was very spontaneous. ‘I had no idea that the picture would become so famous. This was simply our lifestyle – drinks by the pool, outdoor parties.’ When asked why so many people love ‘Poolside Gossip,’ she responded: ‘Because of the mountains, the pool, the sun… and the house, of course.’

Since October of last year the legendary Desert House is looking for its new owners. The announced price of the estate is USD 25 million.