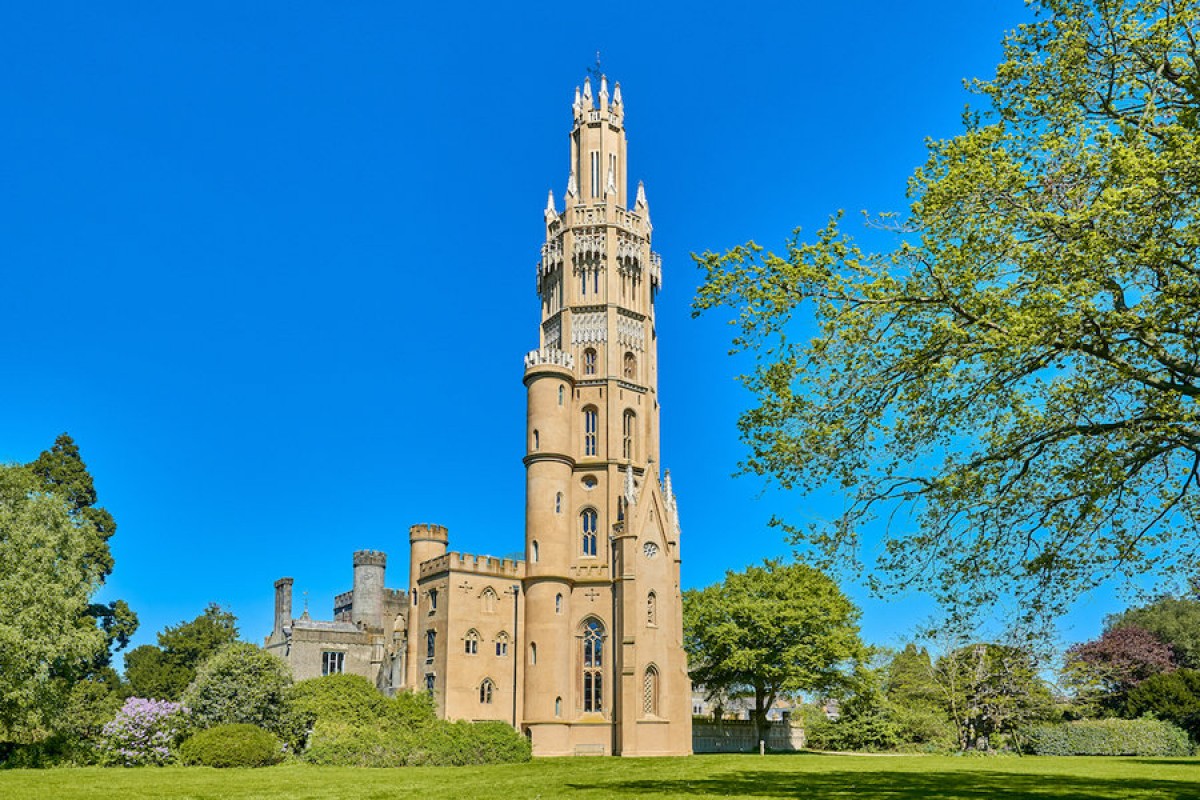 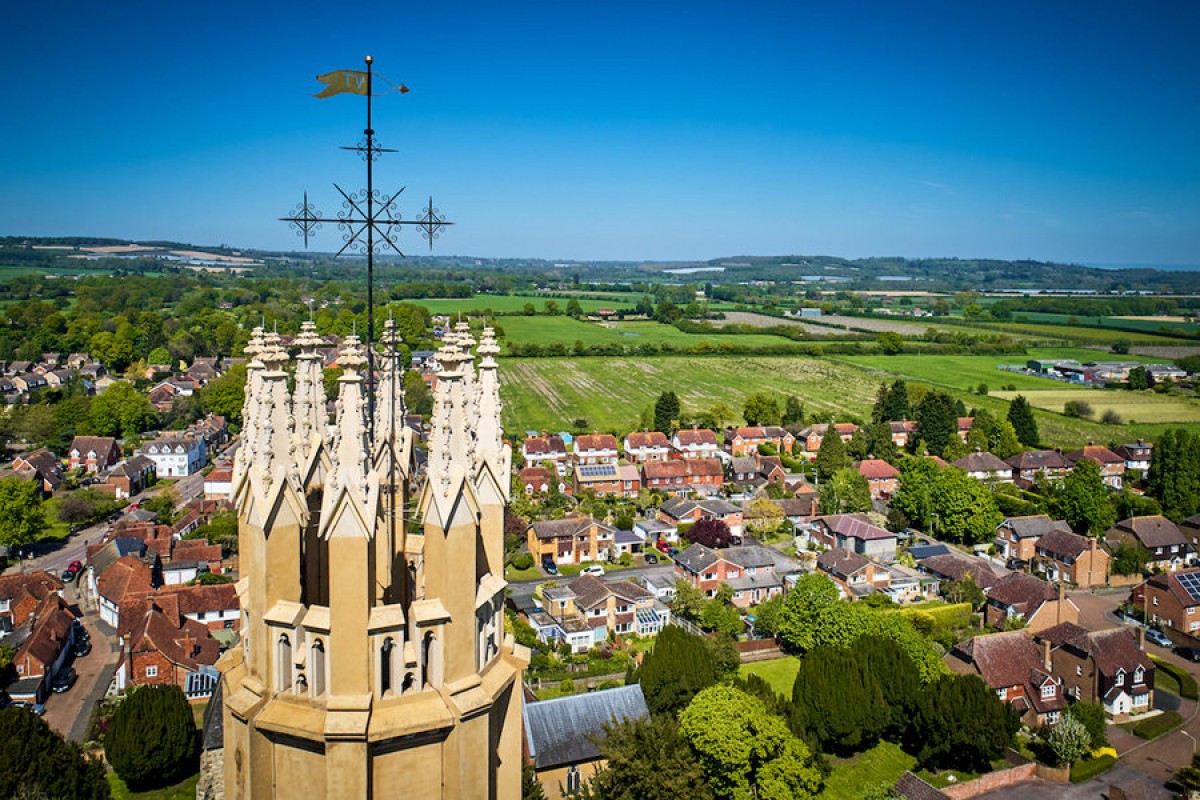 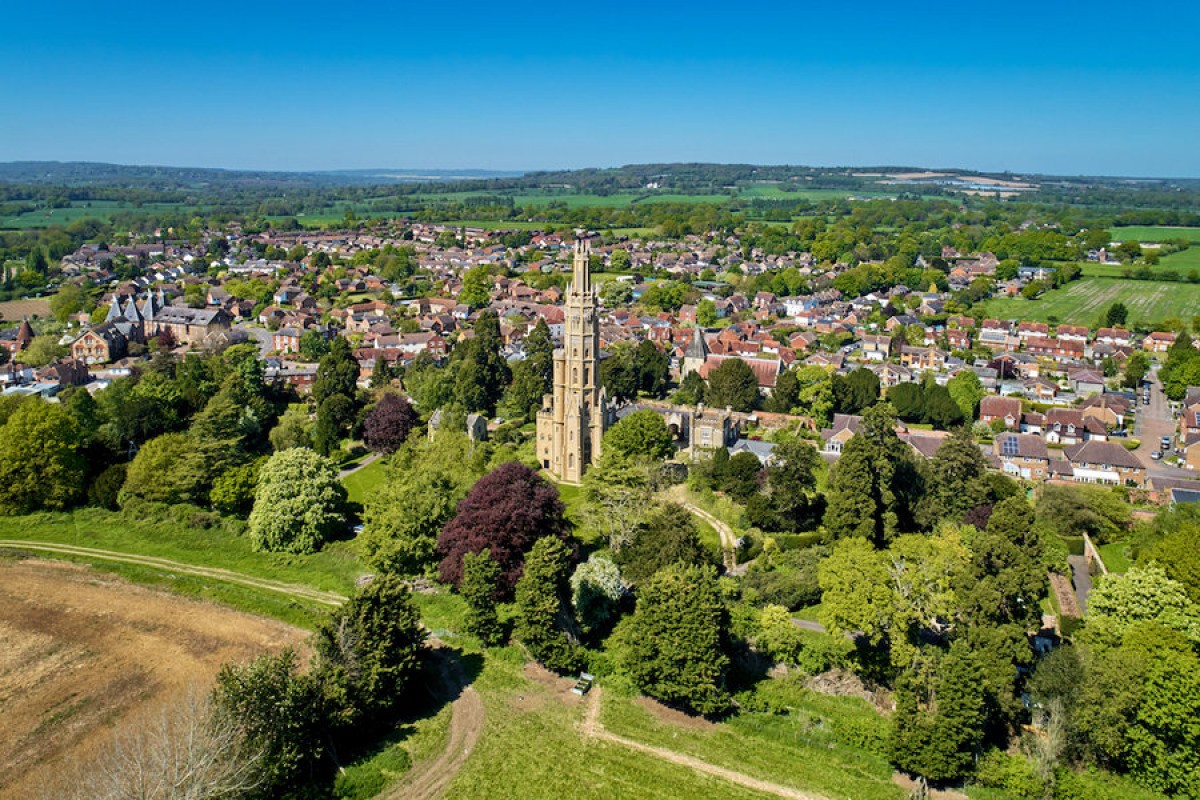 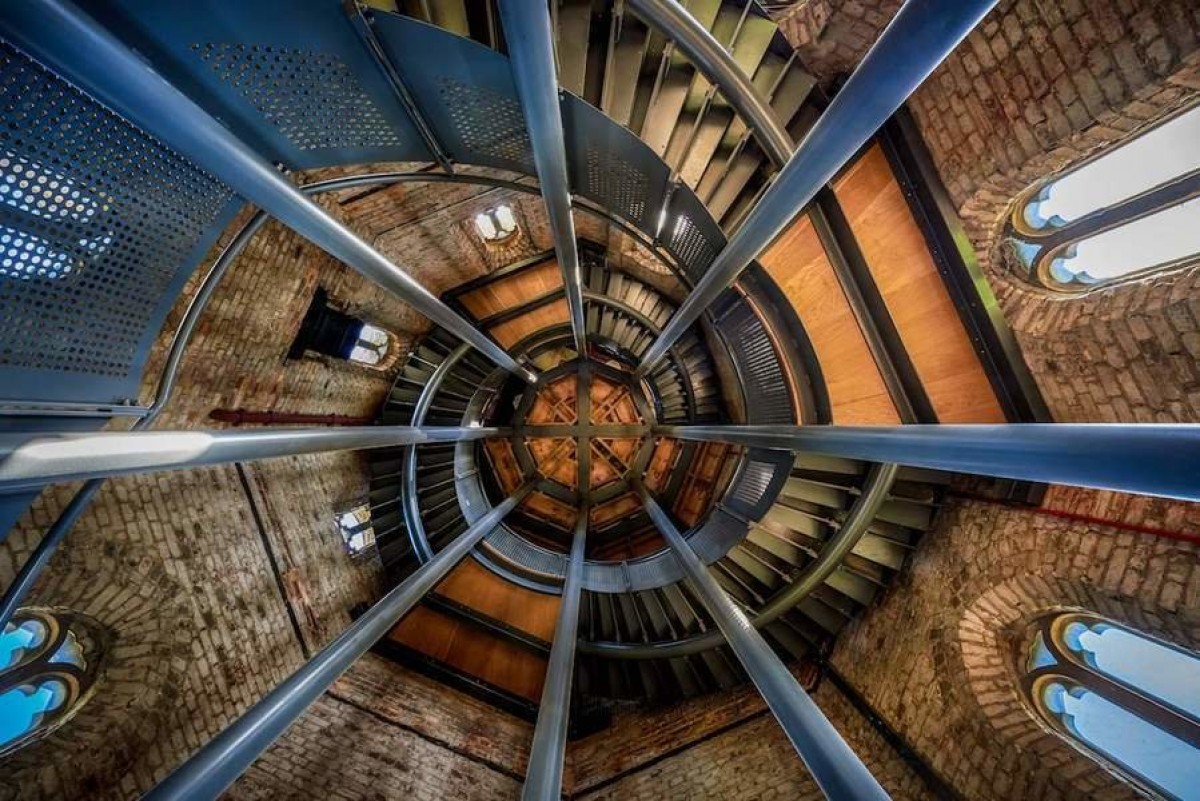 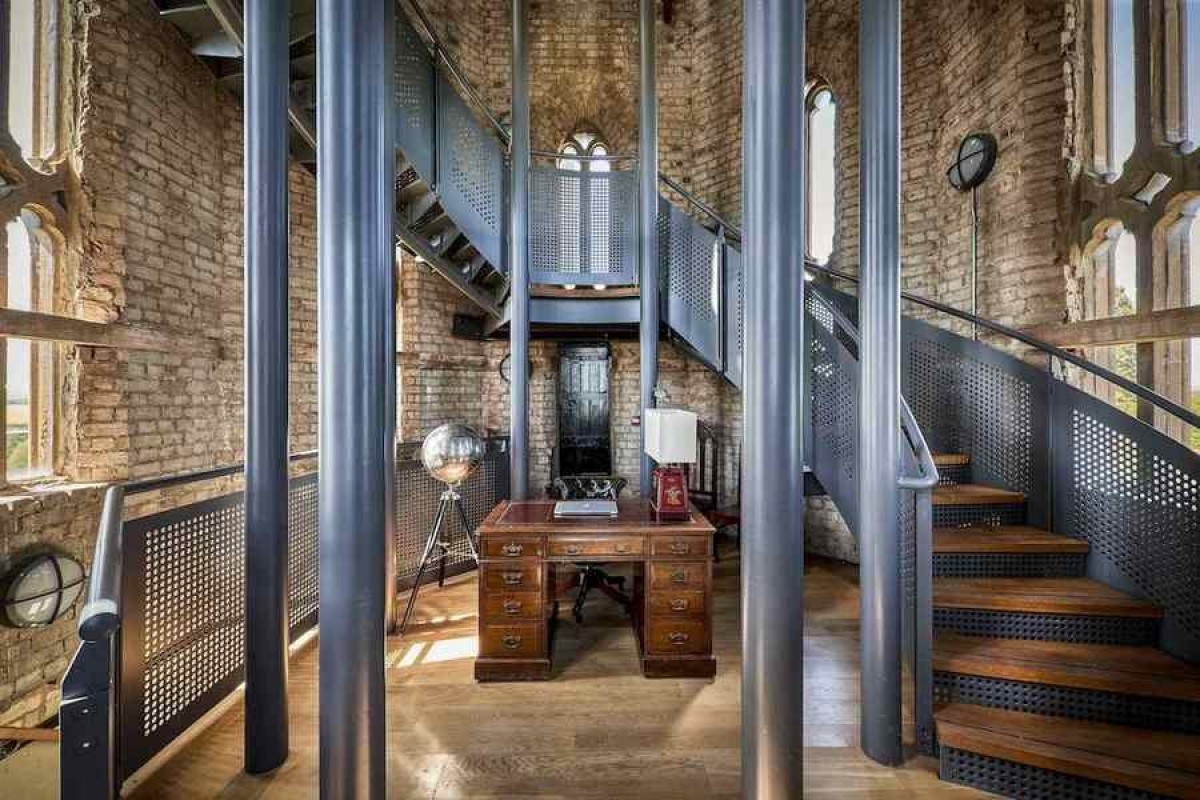 It is becoming increasingly interesting for unexpected spaces to transform and get a new life.

We start our story with a high tower in England, which is said to have been built so that the owner can spy her husband from afar. Now it is announced, offered for sale and accepts offers of more than 2.67 million dollars.
The Khaldu Tower in Kent is on the market in early June and is a remnant of a Gothic-style castle built by Walter May's wealthy merchant and landowner at the end of the 18th century.
After being used as an observer during the Second World War, the tower, which is higher than the Nelson column in London's Trafalgar Square, was abandoned and should have been destroyed. Over the next few decades, it gradually collapsed as local activists united their efforts to keep it.
The special renovation program for over $ 6 million starts in 2010 and ends in 2013. Specialists replace every detail while the interior is transformed into a modern four-bedroom family home. Now the house is spread over five floors and features a cinema hall, a home office, two winding stairs and a lift.

One remarkable single-family home in Worcester, England, which began its life as a water tower, appeared on the market earlier this month for $ 1.97 million.
Known as the Cromwell Tower, the Kennelworth building was converted after working as a water tower from 1930 to 2004 and still retaining its radiance, including the original staircase. The revival of the limited space is unbelievable. The current owners have managed to combine, without problem, the modern with the durable and durable character of the original.
The tall house has six bedrooms, an open-plan kitchen, a gym, a games room, a private living room, a roof terrace, overlooking a landscaped garden.
According to reports, the property was sold for £ 25,000 only at auction in 2016. Now, the converted Victorian water tower, is sold for $ 4.74 million.

The history of the water tower in Lozenets

The water tower of the Lozenets district is one of the emblematic buildings of old Sofia. At the moment, the tower looks like it's out of fairy tales. Tall, with a massive metal door and overgrown with a wild vase, which grew so much that in some places almost completely covers the walls and has grown up with them. The story of the Water Tower is more prosaic, but it does not make it uninteresting. At the beginning of the 20th century, the area around was one of the highest points in Sofia, built mainly with two- and three-storey houses that could not be supplied in a gravitational way by the water supply network, which until 1926 was supplied exclusively with Vitosha water. So they had to build the Water Tower, that is, Huge counter-reservoir that creates water pressure.
The project was created in 1903 by the German engineer Franz Salbach. Not much is known about him except he is from Dresden. According to the electronic archive of the Archives State Agency in the archives of Sofia the original, the copy and draft of the account and the contract between the municipal administration and Eng. Salbach for the study of Vitosha in hydraulics and the elaboration of a project for expansion of the water supply for the period 19.07 .1902 - 9.10.1903 in Bulgarian and German.
However, it was not known for 20 years until the construction was completed. The construction of the tower started only on September 20, 1928 and ended on November 20, 1929. It was built on a French system for the construction of water towers with reinforced concrete and brick masonry. The highest point of Lozenets was then 610.40 m. The Tower Tank is positioned 15 m higher than the highest elevation. Its height is 27 m and the volume of the reservoir - 100 cubic meters. The Rila water pipeline was officially opened on 13.04.1933, with the tower working as an additional facility many years later.
Almost at its top there is a balcony with a beautiful metallic parapet, from which Sofia citizens could enjoy a 360-degree panoramic view of Vitosha Mountain and the city center. Today, much of the view is hidden from the far higher blocks, but at least Vitosha is still visible. The terrace goes out of a massive metal door with a window net without glass. It is so overgrown with wild vines that it is almost impossible to go around. Our team does not try. Inside, just like any real tower, there are winding, spiraling rock stairs that lead to several interchanges. They and the stairs are illuminated by sunlight thanks to strategically placed windows with metal frames. The stairs are floating around a massive concrete hexagonal column that passes through the tower as an axis.
The water tower has served faithfully for a long time. But when the hydrotechnology developed, it became unnecessary and stopped using it for its intended purpose.
Today the preservation of this facility is very important because it is the only surviving independent water tower on the territory of Sofia. There is a second similar facility in Lozenetz (in the park around the Seminary) but it is part of a two-storey building and is built in its roof. Otherwise the tower has its own life - since 2006, the non-governmental association "Name" organizes every year in it becoming the famous Water Tower Art Festival. It is implemented with the financial support of the Sofia Municipality and supports the candidacy of Sofia for European Capital of Culture in 2019.
This year, the festival begins on June 22 and runs until June 30, and behind it are institutions such as the Israeli, American, Austrian and Norwegian Embassies, the Italian Cultural Institute in Sofia and the British Council, as well as several large sponsor companies.
The event is already in the cultural calendar of the municipality and thanks to it the place around the tower is cleared and has an improvised table and benches. Power supply is provided by a cable from the adjacent to the wall of the tower transformer station located to the right of its entrance. It is particularly suitable for it to be painted a large graphite that depicts the tower itself. To the left of the entrance are the massive concrete foundations of a small building where the security of this strategic facility was sitting. Now they have grown trees that cast a shadow in the yard.
In front of all the projects that have been made now to change the purpose of the tower, it is conditional that there be no changes to its external architectural appearance apart from refreshment. Changes in the interior should also be minimal. The municipality of Lozenets will be able to invest in it and turn it into a cultural center. Then the building will now be able to apply for a cultural monument and be preserved in its authentic form for future generations.